he UK’s public sector handed out more than 700 consulting contracts in the seven months of 2019, totalling a value of over £1.3 billion. According to analysis by Consultancy.uk in collaboration with Tussell, while the biggest contracts typically involved the Foreign Office, Brexit was not the only show in town as DEFRA and the MoD also handed out large sums for advisory work.

The Government finds itself racing to implement major change campaigns on multiple fronts in 2019. Brexit had created an unprecedented workload for the Central Government, with the need to set up and plan new systems to cover border controls, trade, agricultural policy and immigration, and establish a contingency plan to ensure the UK is prepared whatever the outcome. The changes come at a time when the Civil Service is majorly depleted, following a decade of austerity measures, something which has led to the Government leaning heavily on the private sector, and particularly consultants, for support.

The perceived heavy spending on consultants by the state – including central & local Government, NHS, universities, housing associations and some public/private hybrids – has caused considerable criticism, particularly regarding whether this presents value for public money. Earlier in the year, this prompted Management Consultancies Association CEO Tamzen Isacsson to highlight how the industry had backed the UK in its efforts to prepare for an uncertain future by providing vital skills, extra capacity and insight and experience from all economic sectors as well as innovative ways of working.

Isacsson told Consultancy.uk, “Brexit planning has been an important part of consultancy work over the past couple of years and a recent independent survey of public sector leaders said consultants gave them access to “independent thinking” (49%), “transformational outcomes” (49%), as well as knowledge transfer and achievement of project goals. As you would expect expenditure on public consultancy is subject to a high degree of scrutiny but the benefits are clear.” 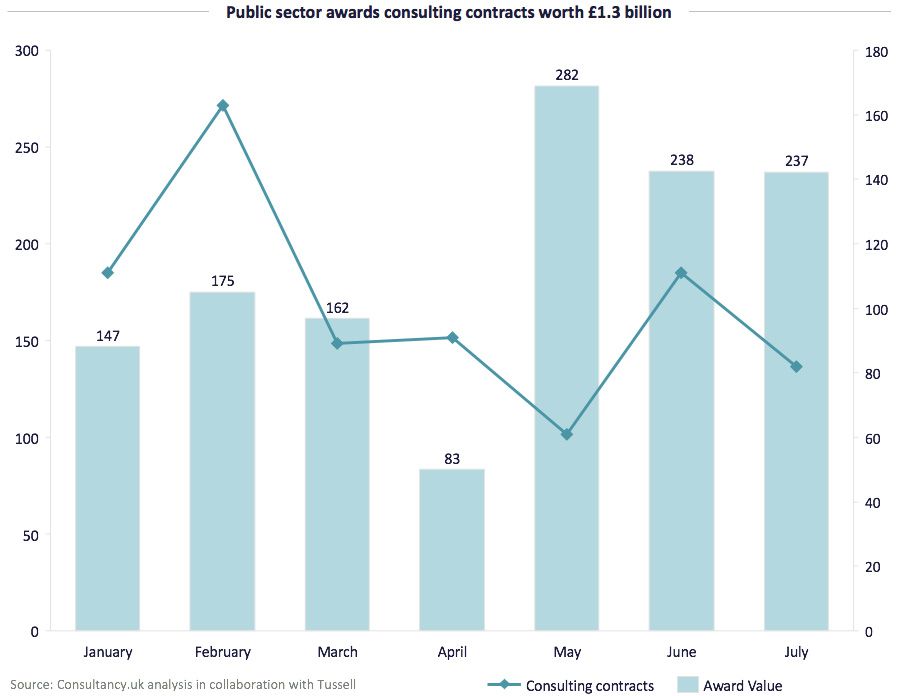 While that particular discussion may continue, the fact remains that the Government is faced with implementing a huge change agenda in the coming months – even without the impending culmination of Brexit. As such, it clearly remains committed to sourcing consulting firms to help it achieve that, and new data sourced from Tussell shows that the Government is willing to spend big to do so.

Tussell is a trusted data source on government contracts, and provides insight and opportunities into public procurement – a marketplace which the researcher contends was worth over £150 billion in the last 12 months alone. A sizeable part of strategic sourcing revolves around the engaging of consulting firms, and in the first seven months of 2019, data shows that the Government has contracted £1.32 billion worth of advisory work.

The value of consulting contracts in the public sector initially plateaued in the first quarter, before declining dramatically to less than £100 million in April. With the Brexit process having stalled, and the Government seemed to hold off on spending for a moment, before a sudden spike in May saw consulting contracts exceed £280 million. In the months since, the heavy expense has continued, and the contracts have hovered around a combined £237 million mark.

While the fast-approaching deadline for Brexit has seen many contracts handed out by the Foreign Office in 2019, there are other issues at play. One of the highest paying gigs the consulting industry received in the last month of July came from the Department for Environment, Food & Rural Affairs (DEFRA). Kainos Software was contracted for a total of more than £36 million in order to oversee the digital transformation of DEFRA’s Rural Payments Agency.

Elsewhere, the Department for International Development awarded a £19.5 million role to Education Development Trust, a non-profit advisory firm based in Reading. The contract will see the entity provide technical assistance an international education programme, which is aimed at improving the quality, equity, efficiency of delivery, monitoring and evaluation, and financing of general education in Ethiopia.

Aside from these examples, though, the Big Four commanded the lion’s share of the highest-worth contracts. The Ministry of Defence (MoD) contracted Big Four firm KPMG to help implement its Defence Support Operating Model (DSOM). The £29 million role will see KPMG help the MoD implement a ‘new approach to improving the effectiveness and efficiency of the department and the Armed Forces’ during a one-year engagement.

Competitor EY also did well out of the contracts. The Foreign & Commonwealth Office (FCO) handed EY a £26 million role as the service manager for the FCO Global Trade Programme. The services EY will provide in this role include management, research and advisory, portfolio management work. The Global Trade Programme is a flagship part of the cross-government Prosperity Fund, and as such has a hefty budget of £150 million to help middle income countries develop trade-related capacity.

PwC similarly gained two of the high-worth public sector contracts. The FCO also handed the firm £20.2 million to oversee its Global Better Health Programme in South East Asia. The project aims to deliver health outcomes through five areas of activity across eight countries in the region. Meanwhile, PwC triumphed in another tender process with the news UK Asset Resolution had contracted it for Project Saturn. The £16.5 million role establishes a single supplier to outsource all aspects of the running of UK Asset Resolution’s remaining business, with the exception of board and company secretarial functions.